The Woman’s march on Washington was a collection of identities that intersected in one purpose; rallying for Civil Liberties. Joining together for the freedom that was promised to us as our birthright. America is our home; she is our adopted mother. During President Trump’s inauguration speech, he promised to put America first.

But his rhetoric is indicative of a single type of America, a single story. The American that is of European decent. The one that is rich in money and intolerance. The one who has gotten what was promised to him from the moment he was born. That is not the Common American. She is one of many faiths, ethnicities, abilities, orientations, occupations, genders, and other many cultures. We are proud, intersectional, and we are strong.

The America that I know is one that is made stronger by our differences. The lines that divide us; we use to build the strongest foundations. We have grown from 200,000 in 1963 (History) to 470,000 in 2017 (NY Times). Arm in arm we march and we lend our voices to each others life, liberty and pursuit of happiness.

We marched for that America.

Martin Luther King Jr. was a preacher who was viewed as more of a threat to our society than the disease of segregation, than intolerance, and especially the domestic terrorism that has been waged and still is being perpetrated against the most vulnerable of us. In my eyes this domestic terror starts with hate speech, and that violence has no place in this nation.

During the hearing of Dylann Roof, a young man who shot nine black Americans in the Emanuel African Methodist Episcopal Chruch on the basis of their race; a victim’s family member said this “We are the family that love built, we have no room for hating” (CNN) Our strength in the face of violent hate and after losing so much, is forgiveness.

But, we must remember the pain of extrajudicial killings from police officers; the deaths of Trayvon Martin, Tamir Rice, Philando Castile, Alton Sterling, Freddie Gray, and countless unnamed others whose justice was denied without police accountability for their fatal actions. Remember that the change we need doesn’t come from a single person, it comes from a movement, it comes from a place of love. 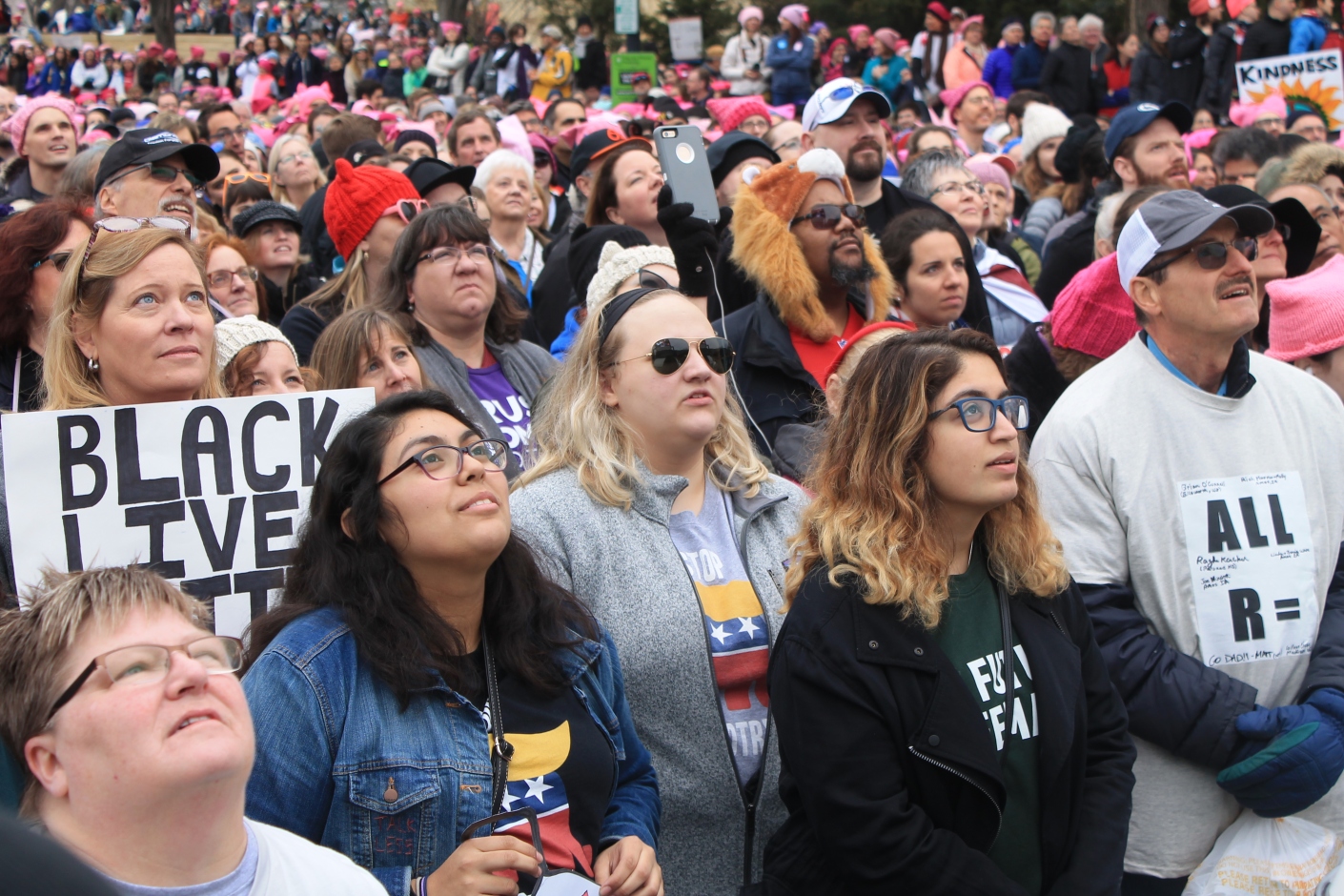 We have not come to denounce each other, we are here to grow in our understanding of each other. To show our solidarity to all others who are also living their nonviolent struggle for peace. I am here to say that Black Lives Matter, Islamophobia is Anti-American, we stand in solidarity of our water protectors in Standing Rock as well as all those people still suffering in Flint MI. Among so many others we stand in solidarity. We must answer the hate by filling the world with more love. I’m hoping by standing out here that the other side will see the validity and soundness of our arguments and appeals. They will gather around the firmness of our truth and our love.

But as Gandhi once wrote back in 1918 in the Indian times, “Prejudices cannot be removed by legislation… They yield only to patient toil and education.”

Donald Trump attended Fordham University and the University of Pennsylvania (BS). And in places of such learning, it saddens me that some lessons didn’t stick with President Trump. With his prosperity, he went to turn over the earth, instead of building bridges and he built walls around his home.

He forgets that we are not opponents on either side of an ideological war. We are not authoritarian soldiers coming to take everything that he holds dear. We have no guns, no tanks, no swords; We only have our pens, our voices, and our want for peace. Especially for those backs that this country was built on. Those who are still searching for the freedom that they came here to find, and who’s justice has been denied for far to long.

To invoke the words of Martin Luther King Jr, just before he was shot like so many of ours today. I have been to that mountaintop, He saw America for all that she could be. He was dismissed as a radical by many but as he states in his “Letter from a Birmingham Jail” He is a radical of love. He lived the revolutionary moment that existed in his mind. And like him, I have seen that shining city upon that hill.

You are here because you have seen what I have. You have heard the words of our new president and you know that those words do not represent America, our shining city that exists in all of our minds. We have seen a world were people are heard and believed and protected from those who would do us violence. Looking at the past of America; we know that intolerance will fail as all things tended with hate do. Progress is achievable because when we rise with love in our hearts; we win.

Get all latest news, exclusive deals and event updates.